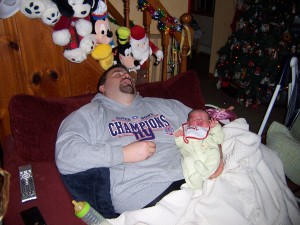 I am worried…  Now for those of you reading who know me personally, you know that those words are almost alien to me.  If there is one thing that served to define me for most of my life it would be the fact that I do not worry about pretty much anything.  Bills?  They will get paid.  Paperwork? It will get done.  My weight?  I will lose it.  Regardless of just about any situation that life throws at me, I generally approach it with the same attitude:  I will get done what needs to get done when it absolutely must be done, and if as long as it doesn’t kill me I will not worry about it.  Up until the past sixteen months, there are few other times in my life where I did not approach life with this attitude.

My father used to complain to me that I never seemed to have  a sense of urgency about anything; admonishing me for having two speeds – slow and stop.  My father was right, I very rarely had a sense of urgency about anything.  This is certainly true for me at work.  The amazing secretaries we have at school all know that if there is a deadline for paperwork or other related duties I will most assuredly meet it, and by meet it I mean literally.  Not a second before.  In fact, a running joke I have with one of our secretaries is that my paperwork is guaranteed “fresh”, as it always represents the most up to date and recent activity on my part.  Ever since I was thirteen, I really never sweated the small stuff – and that is for good reason.

I was granted the gift of perspective on my thirteenth birthday.  For weeks leading up that day I had begun to develop symptoms that progressively worsened day after day.  What started as slightly blurred vision and a stiff neck burgeoned into me going cross eyed and blind in one eye with an incapacitating headache that was almost more than I could handle.  The night of my thirteenth birthday my father realized something was seriously wrong with me and he took me to the hospital.  When I arrived at the hospital the Doctors feared the worst.  I remember being oblivious to my parent’s demeanor as the Doctor said something to them in hushed tones that I was not meant to hear.  Later on I found out that the first doctor informed my parents that I was displaying the classic symptoms of an aggressive brain tumor that only a CT scan could confirm.

To this day I can remember the pings and whirs that CT scanner made as it took pictures of my brain.  I remember wondering what was going on, frustrated at the unknown, yet not worried.  Whatever was going to happen was going to happen.  There was nothing I could do about it.  Honestly, the pain was so bad I almost welcomed death as a reprieve.   The CT scan revealed nothing  (my brain was there, though my wife still argues the veracity of that claim), no growths,  no tumors,  no cancer.  New suspects emerged such as meningitis, but my symptoms did not match the classic definitions of a meningeal infection.  It was then that the Neurologist I owe my eyesight and probably life to, told my parents that he thought it may be a rare disease called Pseudo Tumor Cerebri.  My symptoms matched, but my demographic did not.  This was a disease found more often in women than men, and very rarely in children.  It was more common in obese people, but at the time I was not terribly overweight.  Regardless, he wanted to test me and the only way to do it was a spinal tap to measure my cerebrospinal fluid pressure.

My pressure was literally off the charts.   Normal pressure for someone my age was between 7 and 14 cm of H2O .  My doctor did not expect the pressure I had as apparently my pressure was so high it exceeded the markings on the reservoir of the needle.  My brain was literally being crushed by the very fluid meant to protect and cushion it.  I do not remember that first lumbar puncture – but I distinctly remember the next one several days later.  I guess the pain was so bad on the first one that I just did not feel the spinal tap at all.  That was not the case with the second.  My screams were so loud I recall my mother leaving the room, sobbing as she walked down the hallway trying to escape her helplessness to mitigate my pain.  I never screamed for another spinal tap after that.  I think it was the shock more than anything else…

After seeing countless more specialists, and dozens of spinal taps later, the disease was finally kept in check and I slowly returned to “normal” life.  I missed half of my seventh grade year and apparently rumors spread throughout my school that I had died.  Ironically, quite the opposite happened.  My brush with death at that age gave my thirteen year old self a dose of perspective that most teenagers never get.  Realizing how close I came to losing, at the very least, my eyesight – and at worst my life granted me a realization that life is tenuous and requires attention to the important things.  It was through this experience that I really came to recognize how futile it is to worry about things out of my control and to just take life as it is and embrace the good in it.  From that moment of my life I refused to “sweat the small stuff” and the me that never worried about anything was born.

I would not trade that experience for anything.  Although it cost me the eyesight in my right eye, I was granted a deeper vision of what is important in life.  My worries went by the wayside and I basically just took everything in stride.  That way of thinking defined me right up until Rees died.  Things changed after Rees died.  I think my own personal brush with, and escape from, death actually gave me a sense of invulnerability that was totally shattered on October 27th, 2012.  Rees’ death was a reminder of just how fragile life is.  I could have been Rees 25 years ago, with my Mother experiencing the pain I now do.  Instead, I survived only to see my son die from a completely preventable accident.  Was I so nonchalant about death that I never stopped to make sure that my friend was watching him?  If I had more worry in my life would I have checked to make sure Craig was doing what I asked him to do?  Was I too relaxed with life that I believed no harm could come to my family just because I managed to beat death?  Was I not worried enough??

I honestly do not know the answer to that question.  Maybe.  Maybe not.  Regardless of that question, I can longer say that I do not worry.  Just as my brush with my own demise granted me one perspective on life, the loss of my son finds me faced with a new perspective grounded in the worry of experiencing even more loss.  I worry about my daughters all the time now.  I worry about my wife.  I worry.  Even things that should grant me happiness are now causes for worry:  I constantly worry that I will not succeed with ReesSpecht Life.  My worry makes me feel like I will allow Rees to die again if I cannot grow this movement into something that can meet my vision for it.  I want to provide scholarships for deserving students all over, not just in our local school.  I want people to be kinder to each other, if only a little bit, because my son’s spirit helped inspire them to.  I worry that the children’s book I wrote will not sell and that I will take it as a referendum on what people think about my little boy and what we are trying to do in his name.  I worry that I will not be able to continue to burn the candle at both ends and that either the foundation will suffer, or my students will.  I worry that I am giving too much time to ReesSpecht Life and not enough time to my wife or my little girls – even though they constantly assure me that I am not.  I worry about an unknown future where I have to make a decision between teaching or running the foundation full time.  I worry.

The very last words  I ever said to Samantha in front of Rees were “Don’t sweat the small stuff.”.  I wish I could take my own advice now.  I used to not sweat the small stuff, but now I find that I am obsessed with it.  There are so many hopes that I have for the future and my worry that they will not come to pass makes the little things I used to not sweat seem like insurmountable obstacles to success.  Every fundraiser we do, every post I make on facebook, I worry that people will just lose interest and move on.   Maybe before Rees died I did not worry enough, but now I find myself on the other side of the spectrum.  Hopefully, one day, I will find the balance.  Until that day comes I will continue to move forward as we have – trying to make this world a better place one Rees’ piece at a time. 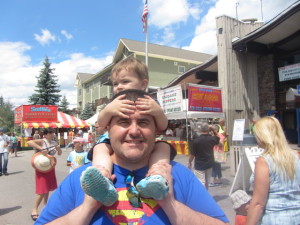