Recollection of my dreams often evades me, but rarely do I ever forget a nightmare.  Last night was one of those moments in which I awoke from a nightmare so vivid, so intense, that even in those first few waking moments I was not certain of just what was “reality”.  In that dream my youngest child drowned – and to say it was jarring is an understatement.  As lucidity returned I found myself still in a panic and went directly to her crib to allay my fears.  Upon entering her room I was immediately comforted by my little girl’s peaceful slumber interrupted only by a few, cute, little moans.  My instinct was to pick her up and cradle her in my grateful arms, but I resisted as to not wake her.  A comforting smile crept across my face as I stealthily slinked out of her room, comforted by the reassurance that all was well.  With last look back, just to make sure, I closed her door and quietly returned to my bedroom.  Maintaining my stealth, I carefully sneaked back into bed with one eye spying to see if I had disturbed my wife with her gently breathing confirming I had not.  Content with the knowledge that all was well, and that the nightmare I awoke from was nothing more than a dream,  I laid my head back down on my pillow.  A sigh of relief was the last sound I made as I gently returned to the slumber that was so rudely interrupted by the terrible vision just moments before…

Seeing her sleeping peacefully was all the re-assurance I needed.

Two years and five months ago, in what feels like another lifetime, something similar played out in the same place, around the same time of the night.  In that mirror-like moment I found myself experiencing a similar situation and fear – only to have it confirmed by an empty crib…  Instead of waking up from a nightmare, I found myself waking into a nightmare.  I was dreaming that my son, Richard Edwin-Ehmer Specht (Rees), was alive and well and playing a game of hide and seek with me.  We were having fun playing peek-a-boo and my heart was at ease.  All was right in the world, yet something felt off.  I subconsciously knew that I was dreaming but I did not want it to end.  Sadly, the dream ended with me opening my eyes into a world where there would be no more peek-a-boos or hide and seek.  I awakened from a happy mirage into the horror of the realization that my little boy was gone.  I rushed to my bedroom window and  peered out to look for the pond, its absence confirming that this nightmare was my reality.

Most of us wake from our bad dreams and eventually shake them off.  Losing a child completely de-polarizes this dynamic, flipping our perception of what is a dream and what is a nightmare.  Every parent who has lost a child spends their waking hours in a sepulchral horror from which our dreams are our only reprieve.  Before October 27th, 2012 I used to be able to shake off the scary thoughts and fears as something that happened to “other people”.  Drownings only happened to families that did not pay attention to their children.  Drownings happened because of bad parenting.  Drownings happened because of perpetual carelessness.  I found out the hard way that drownings can happen to any family at any time.  I could no longer dismiss the carelessness of “other people”… I was “other people” yet I was not those other things.

After we laid Rees to rest and my wife and I formed the ReesSpecht life foundation we had to decide what the foundation would stand for.  We knew we wanted to repay the kindness of others and make the world a better place in Rees’ name, but it seemed so intangible.  At first, we were not quite sure what exactly we wanted the foundation to be about, but we did know for certain what we did not want it to be about: Drowning.  As I look back, I realize that the wound was much too fresh for us to consider the idea of working to prevent drownings.  Sam and I reasoned that there were “other people” who already were working on drowning prevention so we figured we would do something else.  The very dismissive thinking that we thought shielded us from anything bad actually happening to our family reared its head again and we felt justified in our approach.  ReesSpecht Life would not be about drowning.

We managed to successfully distance ourselves from drowning prevention for almost a year until fate stepped in and made sure we took notice.  It turns out there were “other people” who were working on preventing drowning, but they needed help.  They needed a way to get word out and they needed boots on the ground to start educating people about the importance of water safety.  It was in October of 2013 that I was introduced to Bobby Hazen, President of the Long Island Drowning Prevention Task Force, through a mutual friend of ours.  Bobby is someone who, from the first moment you meet him, you realize is as genuine as they come.  He is charming and charismatic and has a disarming smile and easy demeanor that puts you at ease right away.  It took only a few words from him for me to see his passion and commitment to drowning prevention.  I admired that he was so dedicated to a cause that he really had no personal connection to.  He simply wanted to save lives and he was the real deal.  Knowing this, what did I do when I first sat down to talk to him?  I told him that we really didn’t want to do anything with drowning prevention…

My first meeting with Bobby Hazen from the LIDPTF

I explained to Bobby that our foundation had a different calling and that drowning prevention was just not something we wanted to be a part of.  Like any great pitchman, Bobby accepted my stance, but offered a nugget that sparked my interest.  He simply wanted us to “partner” with them to help get word out.  No action needed, just support.  I accepted his proposal and a partnership was born.  Before I knew it, the spark ignited something in me that began to burn a little more each time I met with him.  His undeniable commitment to saving children he would never meet continued to stoke the nascent flame inside of me.  That fire continued to smolder until that eureka moment, while sitting in his office, where I literally saw a sign that our foundation needed to do more… The sign was on his wall and it said “Where children learn to love and respect the water“.  Respect the Water.  Respect Life.  ReesSpecht Life.  REESSPECHT THE WATER! – It was a perfect fit.

It was only weeks before that meeting with Bobby that my sister Kim called me excited that she had an idea about something our foundation could do along with our promotion of kindness.  She said she had a vision of water safety products with a characterture of Rees on them with the logo: ReesSpecht the Water.  She was so excited and kept telling me all her ideas and though I loved them, I honestly didn’t think it would be something we would act on right away.  I tucked the idea away, saving it as one of many potential avenues the foundation could travel in the future.  It didn’t take long for the future to come calling.  When I told Bobby the idea my sister had, his eyes lit up and you could see the gears turning in his head.  We both realized we were meant to meet each other and I immediately understood that drowning prevention was going to be something that I was now able to commit myself to.  It was as if the final piece of the puzzle that I was looking for was found… right in front of me the whole time, but ignored until that moment.  I was all in. 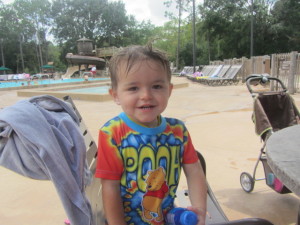 He always loved the water…

According the center for disease control, drowning is by far the number one cause of unintentional, preventable death of children aged 1-4.  The problem with drowning is the fact it is preventable, but most people don’t actually know how to truly prevent it.  My family was wrapped in the blanket of false security in our knowledge of how to protect our children.  There are so many aspects of drowning prevention that I know now that could have possibly prevented Rees’ death.  I cannot go back in time and save my son.  If I cannot save him, then I am going to make sure that no other family suffers needlessly due to this awful, avoidable tragedy.

With that as our motivation, we have officially partnered with the LIDPTF to start the ReesSpecht the Water campaign to teach children and their caregivers the importance of water safety.  The money we raise through this effort will go to fund school shows from the Drowning Prevention Task Force.  These shows are a great way to get people to start thinking about the importance of water safety and drowning prevention.  Every child is sent home with an informational goody bag loaded with materials that parents can share with their children.  It is a great way to build a foundation on which the life saving skills of water safety can be built.  In order to build that foundation, we need support.  We cannot do this alone.  Even with the combined focus of the LIDPTF and ReesSpecht Life, we lack the funds to support these shows on their own.  Starting this April 30th we are taking our first step to raise the necessary funds to support these efforts.  I know now It’s not enough to hide behind the anonymity of the idea that drowning only happens to “other” people.  I am those “other” people.  Everyone else affected by drowning were “other” people until it actually happened to them to.  Turning a blind eye to drowning only increases the likelihood that it will happen. I don’t want others to wake into a world of shattered dreams.   There are some nightmares that we don’t wake up from – I know, I live it everyday.  I really hope, that with your help, we can save some lives – one Rees’ piece at a time.

***  We are holding our first fundraiser for our ReesSpecht the Water Campaign on Thursday, April 30th at 6pm at the Atlantis Aquarium in Riverhead NY.  Tickets are being sold for $150 but I am going to offer a discount to any readers of this blog of an additional 20% off ($30 off per ticket) or full table price (10 seats) for $960 (regularly $1200).  For discount enter the coupon code: dreams at the checkout for your tickets at the link below.  If you pay by check, please write “dreams” in the memo.

Come Join us for a fun night that will serve to plant the seeds that will hopefully save children’s lives all over Long Island and beyond.  We can only do this with your help.  We are a registered 501c3 charity and your donation is tax deductible.  Click here for ticket ordering and event information 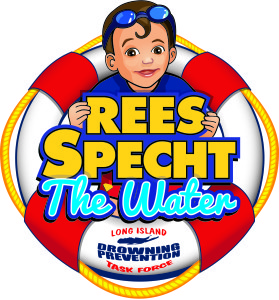 13 thoughts on “Waking into the nightmare”