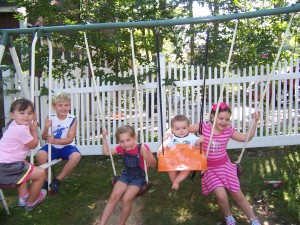 This past weekend was a microcosm of the emotions I have experienced over the past 19 months.  Exuberant highs, followed by sullen lows, inconsistently oscillating back and forth in quick succession leaving me in an apprehensive state not knowing when the switch would occur.  While my emotions seem to be leveling out as of late, I find that certain situations throw off my balance – and this weekend was a perfect example of that.

It actually all started several weeks ago when we received an invitation for our dear friends, Lisa and Mike’s son’s 3rd birthday.  We received a similar invitation a year ago, but we respectfully declined feeling that the timing was too close to our loss of Rees and we just did not feel ready.  This year we decided we were going to face our fear and be with our friends as they celebrated the third year of life with their little boy, Sawyer.  Sam and I had an idea of what we were getting ourselves into, but nothing can totally prepare you for something you have never really experienced before…

Before I go any further, I need to provide a little background: Lisa was Samantha’s college roommate for three years in college.  They hit it off almost immediately in their freshman year, and were basically inseparable for their entire stay in college.  Mike was Lisa’s High School sweetheart who found his way to a college in Virginia near Lisa in much the same way I “happened” to attend a college that was near Samantha.  Upon my first meeting with Mike I knew this was someone who I would call a friend for life – and indeed my earliest inklings were correct.  For the past 19 years the four of us have shared a friendship that I believe is special and rare.  Together, we have shared almost all of life’s ups and downs together, never letting the 16 miles of Long Island Sound that physically separates us keep us apart in our hearts.

We were in each other’s wedding parties.  We suffered together through the sudden loss of Mike’s brother, Dan.  Our teaching careers all started around the same time and we subsequently celebrated the purchases of our first homes.  Every year around Memorial day, we always got together to camp on my property in upstate NY.  The four of us seemed to be locked into a mutual beat of life whose music we enjoyed making together. 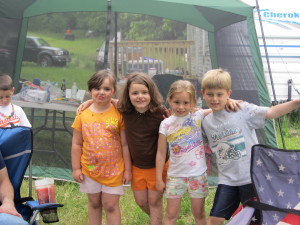 Before we knew it, the four of us became the six of us.  Only one month separated the birth of Lisa and Mike’s first son, Aidan and our Abby.  2 years later we both welcomed our second children, Calla and Lorilei, and the 6 became 8.  Four years later we seemingly capped off a trifecta of synchronization by both welcoming the birth of our third child.  December of 2010 blessed us with Rees, and May of 2011 blessed them with Sawyer.

Most of our friends were excited for me when Rees was born, but none more so than Mike.  He knew, more than others, how much having a boy meant to me.  The night I spoke to him about my early experiences with being the father of a boy for the first time his excitement was palpable.  He kept telling me to just wait and see – that it only gets better.  I never doubted him.  For the 22 months that Rees was with me Mike was spot on.  It always got better and better.

When Sawyer was born 5 months later I remember my excitement at the idea of our two boys playing together.  In my mind’s eye Rees and Sawyer would continue the friendship forged by their fathers and the connection between our families would remain long after we were gone.  It was the perfect book end to our experiences as fathers and friends.

The times we got together in the 17 months Rees and Sawyer shared was a joy to behold.  With each new visit I would observe quantum leaps in their interactions as each one developed new skills and their personalities emerged.  I specifically remember one trip to Connecticut where Rees was walking, but Sawyer was not yet.  Sawyer was sitting in a bumpo on the ground and he was playing with a ball.  Rees came over to him and just swiped the ball from Sawyer and walked towards me holding it up as if he had acquired some rare artifact that he was proud to display his acquisition of.  Sawyer sat there dumbfounded for several seconds and then began to wail over the theft of his ball by the more mobile Rees. I remember being mortified that Rees would “steal” from his friend and I accosted him.  His look of triumph immediately morphed into one of confusion and sadness as he too began to wail.  I told Rees to bring the ball back to Sawyer and he immediately pursed his lower lip, turned defiantly from me and proceeded to throw the ball back at Sawyer (I recall feeling guilty about noticing how well Rees the threw the ball and his impeccable aim- and the pride I felt at how well he threw it!). 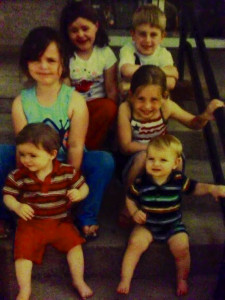 To the best of my memory that was the last trip they ever saw each other.  The realization that there would be no further opportunities for Sawyer to play with Rees hit me hard.  Every time I see Sawyer now I see what could have been for my little boy.  Each milestone he achieves is something I will never experience with my own son. I feel jealous.  I feel envious.  I feel ashamed for feeling it.  It’s the ultimate catch 22, with my emotions stuck in the middle.  Mike was wrong, it doesn’t always get better.  Sometimes it gets worse…

Worse happened this weekend.  While friends and family of Sawyer sat around singing “Happy Birthday”, smiling and laughing the whole time, I spied Samantha on the other side of the room from me.  I saw her trying to smile, her eyes welling up with tears.  I knew she was feeling the same thing I was:  Rees should have been sitting in his own chair 5 months ago, and we should have been singing it to him.  She didn’t have to utter the words to me, I know what she was thinking.  There might as well have been an empty chair next to Sawyer during the party, because in both our minds’ eye, there was.  I was angry; not at Sawyer, not at my friends… but at life.  I just wanted to run away and feel nothing.  I can’t describe the mix of emotions that was going through me at the time.  It was all in one, sadness, anger, resentment, joy, and hope.  Emotions that had no business co-existing were present, all at once, and my mind just could not handle it.

After the singing was over I couldn’t find Sam.  I asked another college friend who was there where she went, and she told me she was in the restroom.  I knew exactly why she was there.  She couldn’t escape anymore than I could, and the restroom was her only place to release the emotions welling inside her away from everyone else.  She came out of the restroom a few minutes later, eyes swollen and red – but with a smile.  It was the smile every parent who has lost a child has learned to master: the I’m totally fine now, no need to worry about me, nothing to see here, move along please smile.  I know because it was the same smile I was wearing.

Sam and I have gotten really good at that smile in the past 19 months.  I admit, she is better at it than I am.  Mine still has a slight curl to my lip that belies my true feelings.  Sam, on the other hand, almost pulls it off.  In fact, if it weren’t for her swollen eyes, I may have even fallen for it.  I just held her and kissed her and we both must have looked ok because people offered us cake and talked with us like nothing was wrong – and that is exactly what we want.  We don’t people to know anything is wrong because we don’t want to bring them down.  Score one for fake smile.

I can honestly say I did not fake smile the rest of the weekend.  I don’t think Sam did either.  Once everyone else was gone, and it was just us and our good friends, there was no need to hide.  It was like old times.  Our children were playing, laughter was plentiful and all was right in the world – with one exception.  Every time I saw Sawyer I saw Rees.  I saw what Rees would be doing.  How tall he would be.  The toys he would be playing with.  It wasn’t all sad though:  I also saw hope.  I was able to pick up Sawyer and play with him.  He calls me “Uncle Wich”… and it just melts my heart.  In those quieter moments I found I was able to see my little boy through his eyes.  During many of those moments I imagined a parallel universe (that likely exists according to current scientific understanding) where Rees never died.  I wondered what is he like?  How has he changed?  Does he like Star Wars and Transformers?  Or is it something else?  Does he still love tractors?  Is he playing with Sawyer?  Are they best buddies?  I would like to think so.  I would like to think they are the best of friends in this place.  I only wish this place didn’t just exist in my mind.  I wish I were there right now, if only for a moment, so that I could tell our Sawyer all about the friend he never knew…

3 thoughts on “The Friend you never knew…”