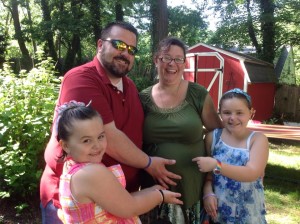 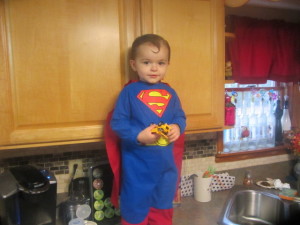 22 months represents his entire life.  Beginning to end.  Everything he was, everything I know about him – I feel about him, is derived from a lifetime that spanned 2 months shy of 2 years.  Most of the things I own, I have owned for much longer than 22 months… and there is not one of those things, including my own life, that I would not trade to have him here today.  I’ve written before about how time is such a cruel mistress.  The longer I live, the more time seems to take from me.  I guess this is the part of growing older that I never contemplated when was I younger.  Time is a huntress that starts tracking you and everything you love, from birth.  From the moment you enter world a new huntress is born that begins its mission to erase everything you are, and everything you will be.  As we age the huntress hones her skill until she is finally ready to make the final strike.  Sure, some of us are able to dodge the huntress at length, but no matter how wily we are, time will always strike true.

Time does this for everyone, and everything that has ever, or will ever, exist.  The paradox of human life is the fact that we are completely aware of time stalking us, yet we are totally powerless to stop it.  No other creature on this planet understands its own futility against time more than we do.  The cruelty of time is the fact that in our youth we feel we have so much of it, we don’t consider the future – while in our twilight we see the long road behind us with the inevitable terminus ahead but spend too much of  what remains lamenting the detours we took when there was more road ahead.  We spend so much time worrying about time, that we forget that there is one place in which time has no meaning: the present.

“The clock is running. Make the most of today. Time waits for no man. Yesterday is history. Tomorrow is a mystery. Today is a gift. That’s why it is called the present.”
― Alice Morse Earle

In those 22 months of Rees’ life I am not sure if there many times that I stopped to think, in the present, of just how lucky I was.  I know there were times – there had to be, but I don’t recall anything in particular.  I took so much for granted in those 22 months because, in my mind, there was so much more time to be had with Rees.  I had everything planned out.  We would play with transformers together.  Pretend to be superheroes together.  Dig a ditch together.  Make fire.  Look up at the stars.  Talk about girls.  Play videogames.  Watch the Mets disappoint us on a yearly basis…etc.  I had his future all planned out.  It was going to be amazing.  It was going to be fun.  It was going to be the best.  It was never going to be.

I did not know on October 26th, 2012 that would be my last time saying “goodnight, little man”.  I didn’t think time was going to track my little boy down.  At 22 months time doesn’t have any teeth – it shouldn’t be able to do what it did.  The future I thought I had on the 26th was destroyed the very next day.  From the moment of his death, until the moment of mine, time will now do nothing but remind me of what I had.  It is almost as if time now taunts me as she moves closer to taking her final lunge… END_OF_DOCUMENT_TOKEN_TO_BE_REPLACED

The first few weeks of grief after losing a child are a mixture of rage, sadness, helplessness and fear: An unstable concoction that can react and explode at any given moment.  As someone who can now count himself among the unfortunate fraternity of those who lost a child I am sometimes asked by people to reach out to others who have recently suffered the same loss.  The almost universal inquiry that follows is if I can say something , anything, that will help them or guide them along their path.  Sadly, it is in those early days that words will have little or no effect.  I cannot describe the hysteria that is felt in the immediate aftermath other than to say it is a wheel of emotions in perpetual flux.  You are in an unnerving state of constant emotional change and nothing can stop that wheel from making its revolutions.  One thing I do tell these grieving parents is that it is important to feel every single one of those emotions in order to begin the process of healing.  Just as in chemistry, the reactants must come together to form a new product.  As the reaction proceed energy is released – sometimes furiously.  The products can only form in the wake of tumult and chaos. There is no other way to produce the end product.  Similarly, the grieving parent must experience and acknowledge every ounce of rage, sadness, helplessness and fear, as those feelings catalyze the synthesis of the “new normal”  they will eventually find themselves in.

Often times when I speak to grieving parents  (myself included) they recognize the fact that their friends and family want to help them – either through actions or words, but that very little resonates; at least at first.  Most people’s instinct in the wake of child-loss is to say things that they think will help the grieving parents. Paradoxically, at least to those who never suffered the loss and don’t truly understand it, those first few weeks are the worst time to hear advice on grief.   The reaction that child-loss generates is so volatile that our first thought is to “help” our hurting loved ones  and try to say anything (and often everything) that we think will “make it all better”.  In a way, our loved ones try in vain to keep the reactants of sadness, anger, rage and hopelessness away from the grieving as a means to avoid the combustion that follows.  Although the intentions of our loved ones is pure, they really can’t fathom what the grieving parent is going through.   For our loved ones recognizing the magnitude of the loss you experienced, coupled with their intrinsic fear of it happening to them,  results in the subconscious thought that they don’t want to even imagine what you are going through.  This is not an indictment of those we love, rather it is simply a function of the brain’s coping mechanism for something often described as unimaginable.

Outliving our children is not unimaginable, every parent has imagined that scenario and then tucked the thought away as quickly as it appeared.  No, losing a child is simply nature’s greatest cruelty and it represents a primal fear we simply do not ever want to face ourselves.  When a loved one loses a child there is no hiding, no tucking away of the thought.  We are forced to witness a reaction that is explosive and violent:  Of course we want to put out the flames, it’s only natural.  This natural need to try and fix that which is broken in those we care about leads to statements like:  “Look for the signs and you will see he is with you…”.  Those very words were uttered by countless people in the wake of Rees’ death.  To be honest, at the time and from my perspective, they offered very little comfort and often times just deepened the wound his absence caused.  I remember resenting hearing those words from people.  I knew they meant well.  I know they said it because they cared. END_OF_DOCUMENT_TOKEN_TO_BE_REPLACED